In affirming its ambition to be a world-class player in the energy transition, TotalEnergies has committed to profoundly transforming its production and sales while continuing to meet the energy needs of a growing population. Following the example of biogas, the Company is developing a wide range of energies in an integrated approach (from production to marketing) in order to decarbonize its energy offering and reach its objective of carbon neutrality by 2050, together with society.

Biogas, at the service of decarbonization and energy sovereignty

TotalEnergies is committed to developing and operating biomethane production units from organic agricultural and agri-food waste, and to commercializing biomethane as a renewable complement to natural gas1. Once purified, the biogas becomes biomethane. This gas, which is compatible with existing gas infrastructures, has a key role to play in decarbonizing natural gas, reducing greenhouse gas (GHG) emissions and developing a circular economy.

In our commitment to accelerate the decarbonization of the energy mix, the Company has set itself the goal of producing 2 TWh/year of biogas by 2025, and more than 20 TWh/year by 2030 worldwide. This production is equal to the annual gas consumption of 2 million households and will aim to avoid the emission of 4 million tons of CO2.

We are convinced that biogas will be a major energy source in the coming years to help decarbonize the industry and transportation sectors while reducing CO2 emissions.

Beyond being a transitional energy, biogas contributes to securing the gas supply of France and Europe for the coming years. By developing a local industry, the production of biogas helps to strengthen our energy autonomy. Discover TotalEnergies' objectives and ambitions in biogas production with the interview of Olivier Guerrini, Vice President Biogas BU. 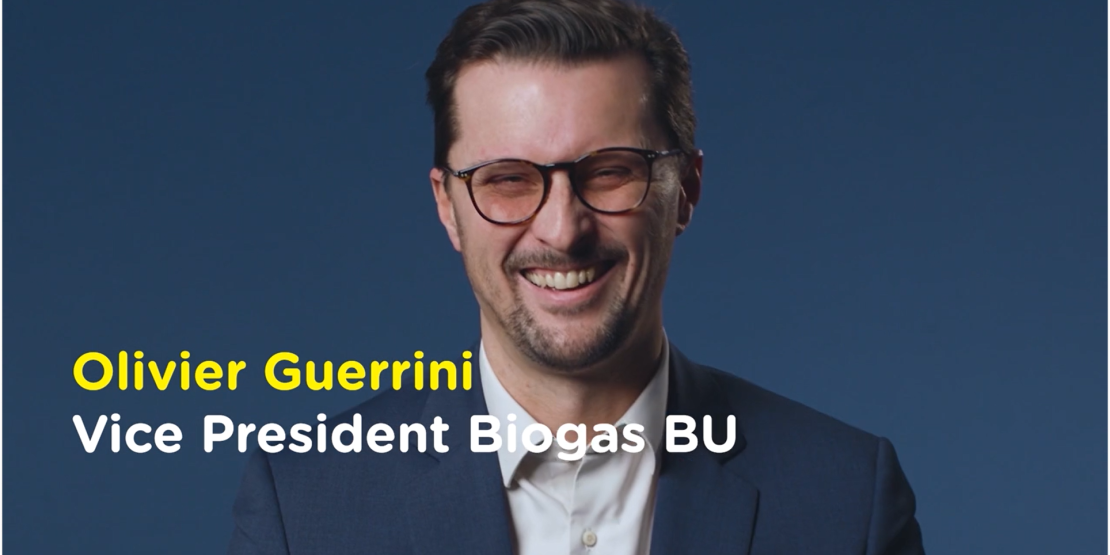 Develop our presence in biogas and multiply our points of anchorage 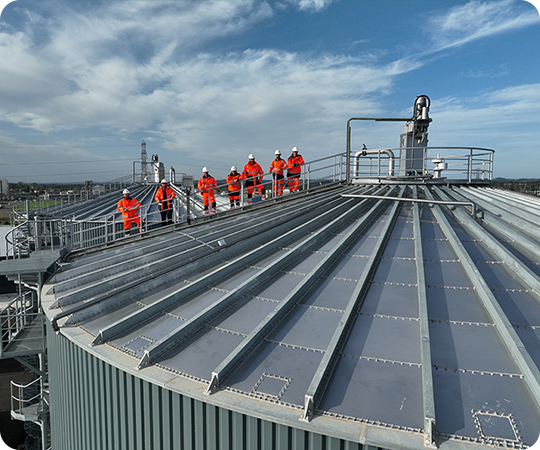 To meet its short- and medium-term objectives, the Company is supported by partners with leading positions in their markets in France and internationally. TotalEnergies has acquired Fonroche Biogaz, the French market leader in renewable gas production, as a platform for its ambition to become a growing player in biogas. To continue this process, in February 2022, TotalEnergies and Veolia announced the signing of an agreement to valorize biomethane from Veolia's waste treatment facilities operating in more than 15 countries. The partnership could produce up to 1.5 TWh of biomethane per year by 2025.

At the end of 2021, TotalEnergies and Clean Energy, in which the Company is a shareholder, will start building their first biomethane production unit in Friona, Texas. The biomethane produced will be used as alternative fuel for mobility, contributing to the decarbonization of road transport. Also in India, the Company has entered the market through the Adani Total Gas Limited JV, with a first biomethane project in Barsana, in the state of Uttar Pradesh.

On the French market, TotalEnergies is also interested in developing partnerships with players who share the same vision of the need to move their sectors of activity towards a sustainable economy. In this regard, since March 2022, TotalEnergies and the Fédération Nationale des Syndicats d'Exploitants Agricoles (FNSEA) have signed an agreement to support and accelerate the energy, environmental and economic transition of the agricultural sector in France. This innovative partnership will create synergies between the agricultural world and the energy sector.

In France, the Company commissioned its new BioBéarn anaerobic digestion unit in Mourenx, in the Nouvelle-Aquitaine region, a few weeks ago. Since January 2023, TotalEnergies Biogaz France's 8th production unit has been producing its first biomethane volumes. By 2023, the biogas will be injected into the Teréga network, providing local communities, public institutions and households with the benefit of decarbonizing local companies. With a production capacity of 160 GWh, BioBéarn is the most important methanizer in France.

In January 2023, TotalEnergies, France's leading biogas producer, will have a total production capacity of nearly 700 GWh. This represents the equivalent of the annual gas consumption of 140,000 inhabitants and avoided CO2 emissions amounting to 140,000 tons.

Find more on our major projects

TotalEnergies and Veolia Join Forces to Accelerate the Development of Biomethane

TotalEnergies is expanding its natural gas offering by including biogas to develop sustainable, forward-looking modes of transportation. In February 2021, TotalEnergies will inaugurate the largest service station in France dedicated exclusively to NGV and bioNGV in Gennevilliers.

The opening reflects Total's ambition to become a leader in the distribution of NGV and bioNGV in Europe. An alternative fuel, natural gas for vehicles (NGV) is a vector for the energy transition in the transportation of people and merchandise.

The Company is committed to accelerating its NGV and bioNGV production by 2030. In 2018, TotalEnergy became a majority shareholder in Clean Energy, the leading North American supplier of renewable gas for mobility. Clean Energy has 570 stations in the United States and Canada mainly dedicated to heavy-duty fleets.

450
European network stations operated by TotalEnergies by 2025
Over 600
stations in Asie (India, Pakistan) by 2025

TotalEnergies is focusing its development strategy on the entire liquefied natural gas (LNG) value chain: gas production and liquefaction, LNG transportation and trading. Downstream, the Company has also actively invested in LNG infrastructure, critical to support its shipping customers’ uptake of LNG as a marine fuel.

Since November 2020, TotalEnergies has been operating the Gas Agility in the Port of Rotterdam, an LNG bunkering vessel that can load and store up to 18,600 m3 of LNG. An identical bunker vessel, the Gas Vitality, has also been positioned in Marseille at the end of 2021.

In Asia, TotalEnergies will shortly be commissioning a third LNG bunker vessel in the port of Singapore, where the Company has been granted an LNG supplier's license for a period of five years from January 1, 2022.

The next step is to develop the share of liquefied biomethane (bioGNL) in this service offering. The Company already offers refueling to its customers in Europe that includes a share of BioGNL through Guarantees of Origin.