Our commitments and progress indicators

TotalEnergies operates in many different countries with disparate and complex economic, social and cultural environments, where governments and civil society have especially high expectations of the Company as an exemplar. Within this context, TotalEnergies strives to act as a vehicule for positive change in society by helping to promote ethical principles in every region where it operates.

The Company also refrains from resorting to artificial or aggressive tax planning and in particular is committed not to create subsidiaries in countries generally acknowledged as tax havens and to repatriate or liquidate existing subsidiaries, where feasible.

Lastly, TotalEnergies is fully committed to fighting corruption and has adopted a policy of zero tolerance in that area.

In addition to that commitment, it lends active support to initiatives promoting greater transparency. TotalEnergies publishes in its Universal Registration Document an annual report covering the payments made by the Company 's extractive companies (fully consolidated entities) to governments and the full list of its consolidated entities, together with their countries of incorporation and operations.

The Company also publishes a tax transparency report which provides additional information on the taxes paid in its main countries of operation.

TotalEnergies publishes a report based on the new EITI (Extractive Industries Transparency Initiative) guidelines in November 2020 designed to promote transparency in the trade of raw materials. In accordance with the EITI framework, of which it has been a member since 2002, TotalEnergies advocates for the disclosure by countries of their petroleum contracts and licenses.

In 2018, the Company introduced a worldwide employee community volunteering program called Action!, designed to give its employees the time and opportunity to do more to foster development in its host regions. Action! lets volunteer employees devote up to three workdays a year to local community projects that fall within the scope of the TotalEnergies Foundation program.

By the end of 2021, the program had been implemented in 93 countries, and more than 17,400 inclusive projects had been carried out since the program 's launch.

Whether with regard to safety, health, climate, the environment or shared growth, TotalEnergies manages its operations with the aim of working in a sustainable, active and positive manner in all of the Company 's host countries. The Company was one of the first in the industry to publish measurable improvement targets in these areas. 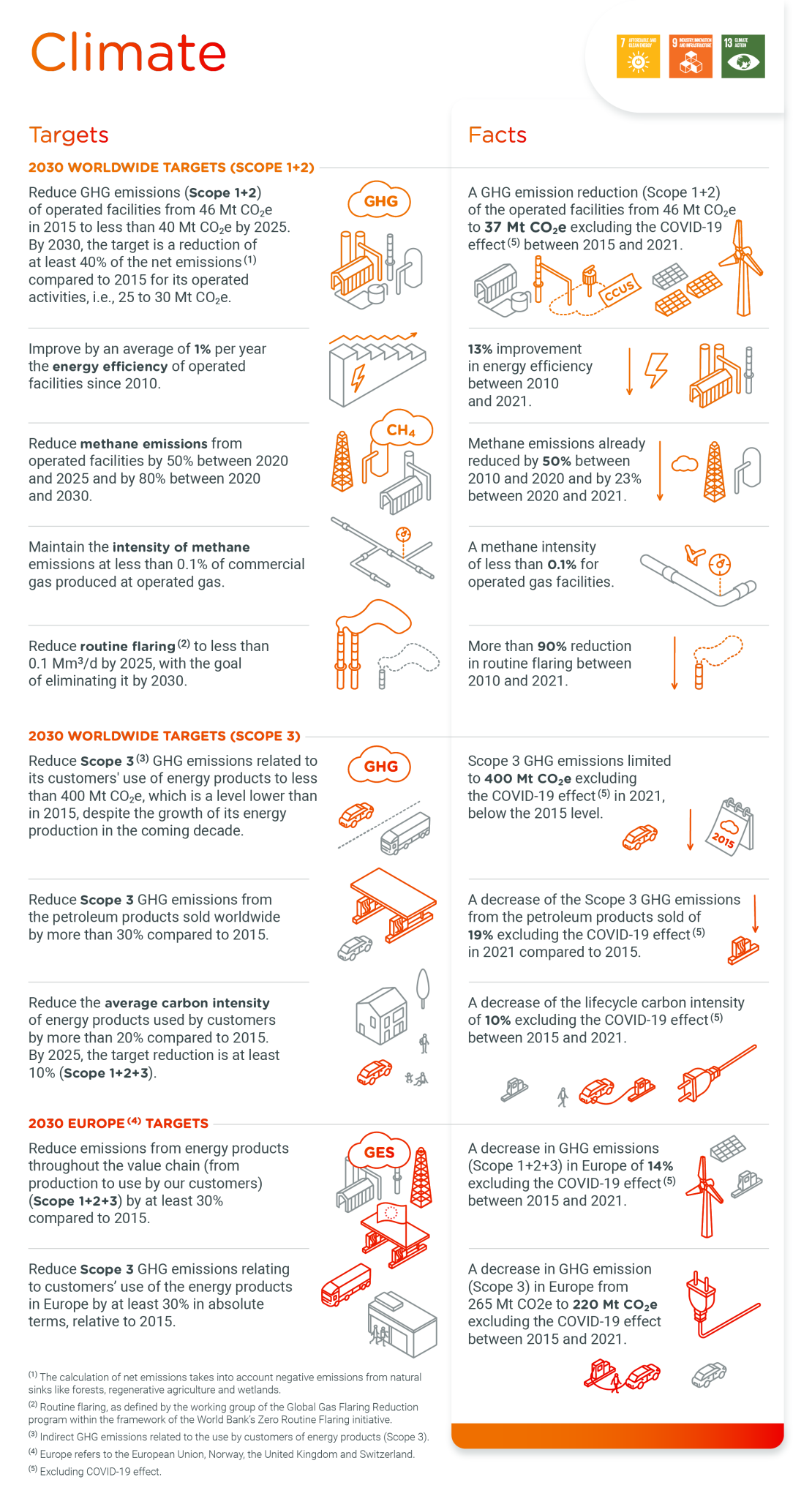 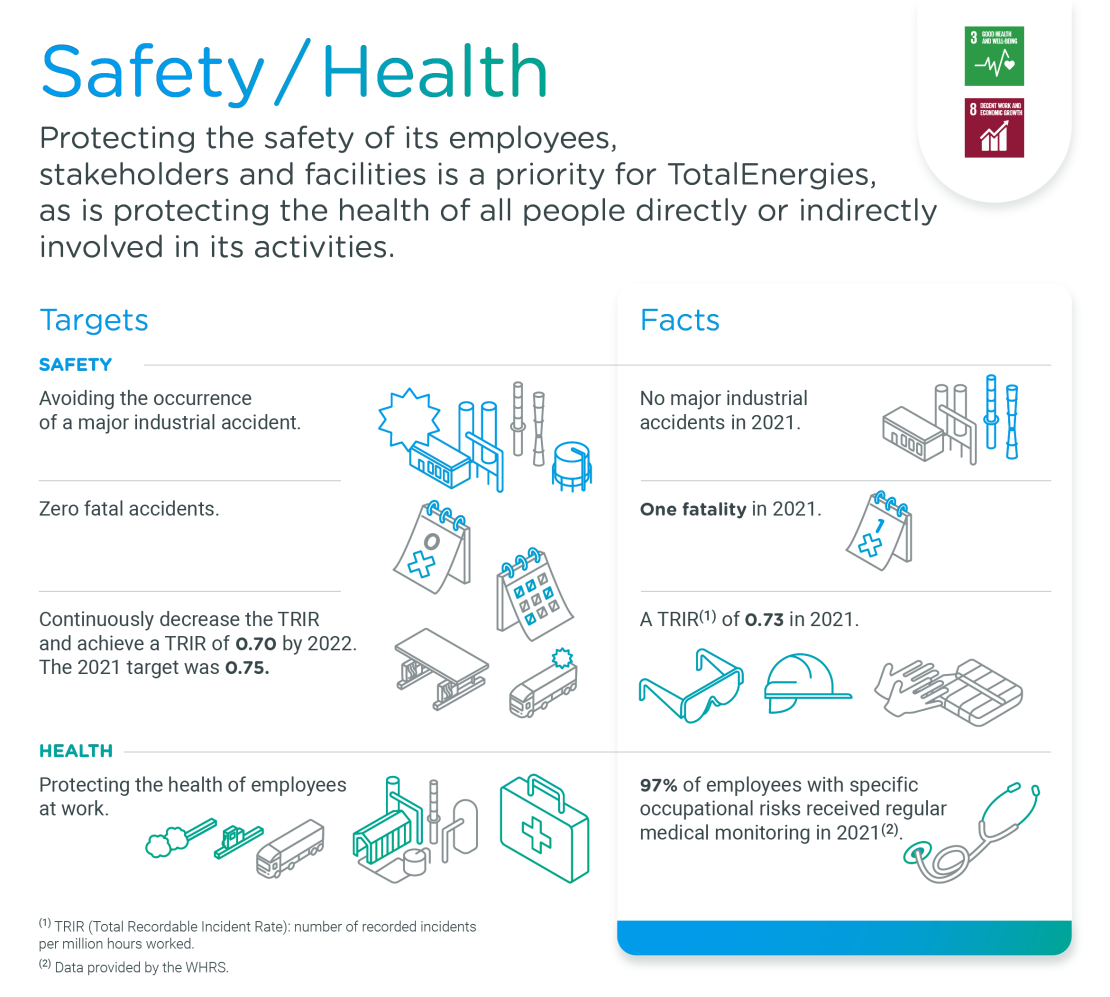 Target: Avoiding the occurrence of a major industrial accident.

Facts: No major industrial accidents in 2021.

Target: Protecting the health of employees at work. 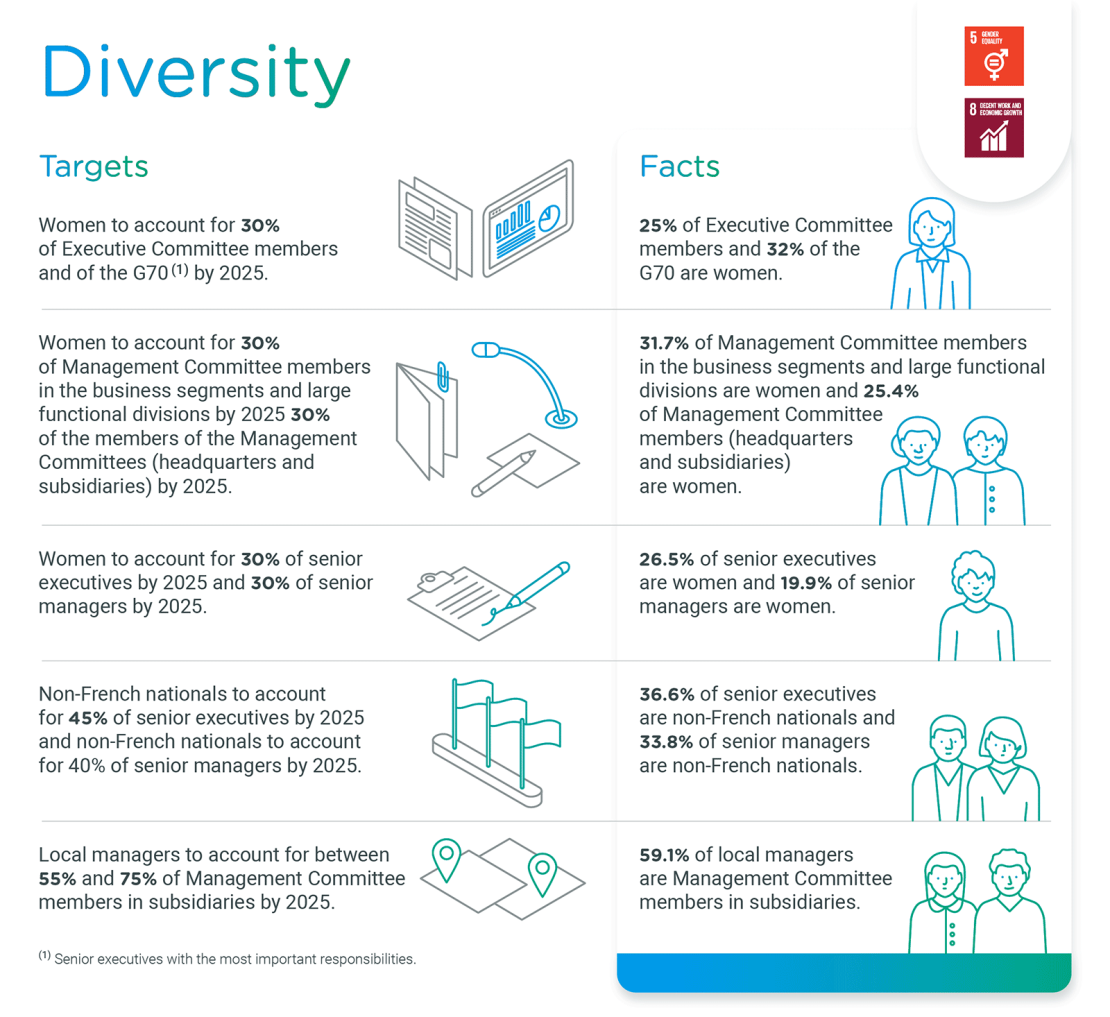 Target: Women to account for 30% of Executive Committee members and of the G70 by 2025

Facts: 25% of Executive Committee members and 32% of the G70 are women

Target: Local managers to account for between 55% and 75% of Management Committee members in subsidiaries by 2025

Facts: 59.1% of local managers are Management Committee members in subsidiaries. 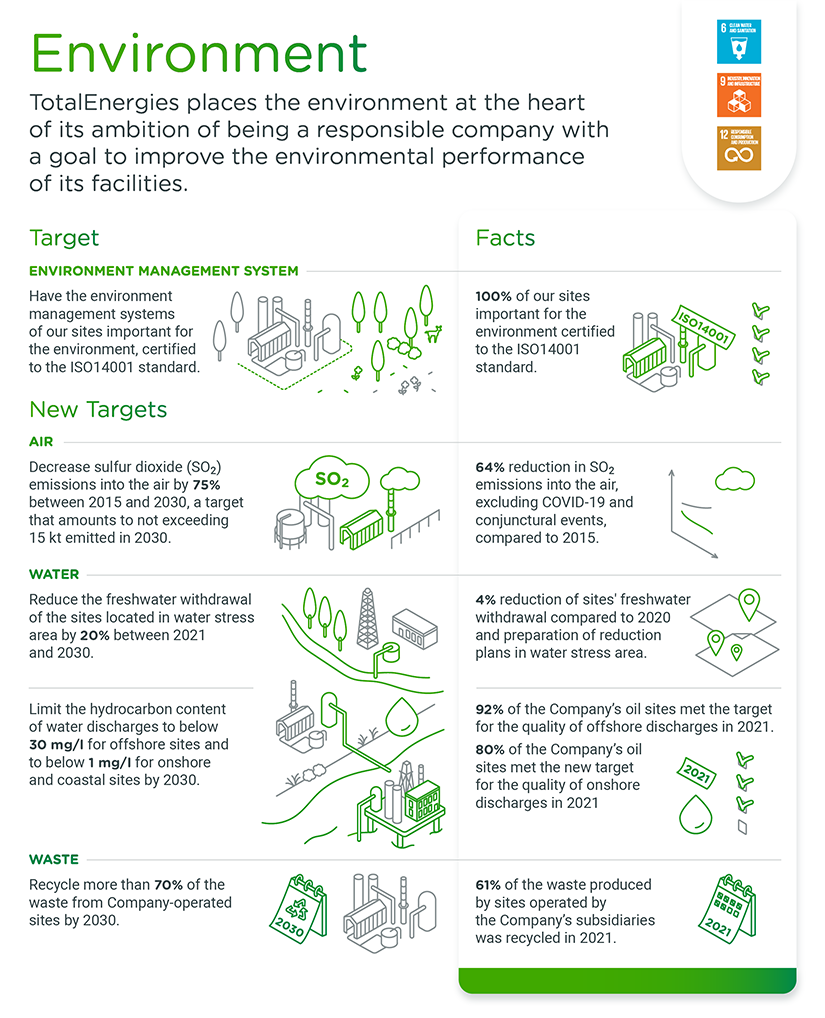 Facts: 100% of our sites important for the environment certified to the ISO14001 standard.

Facts: 64% reduction in SO2 emissions into the air, excluding COVID-19 and conjunctural events, compared to 2015.

New target: Reduce the freshwater withdrawal of the sites located in water stress area by 20% between 2021 and 2030.

Limit the hydrocarbon content of water discharges to below 30 mg/l for offshore sites and to below 1 mg/l for onshore and coastal sites by 2030.

92% of the Company’s oil sites met the target for the quality of offshore discharges in 2021.

80% of the Company’s oil sites met the new target for the quality of onshore discharges in 2021.

New target: Recycle more than 70% of the waste from Company-operated sites by 2030.

Facts: 61% of the waste produced by sites operated by the Company’s subsidiaries was recycled in 2021. Commitment: Refrain from conducting oil and gas exploration or production operations in the area of natural sites listed on the UNESCO World Heritage List

Facts: No oil and gas exploration or production activity in the area of natural sites listed on the UNESCO World Heritage List

Commitment: Refrain from conducting exploration in oil fields under sea ice in the Arctic

Facts: No exploration activity in oil fields under sea ice in the Arctic

Facts: Eight biodiversity action plans deployed or in preparation in 2021 for projects located in protected areas

Commitment: Deploy biodiversity action plans on existing sites which are important for the environment

Facts: More than 1,600 employees made more aware of biodiversity within the framework of the Action! program

More than 4,700 biodiversity datasets downloaded from the Global Biodiversity Information Facility (GBIF) database and some 15 citations in scientific publications 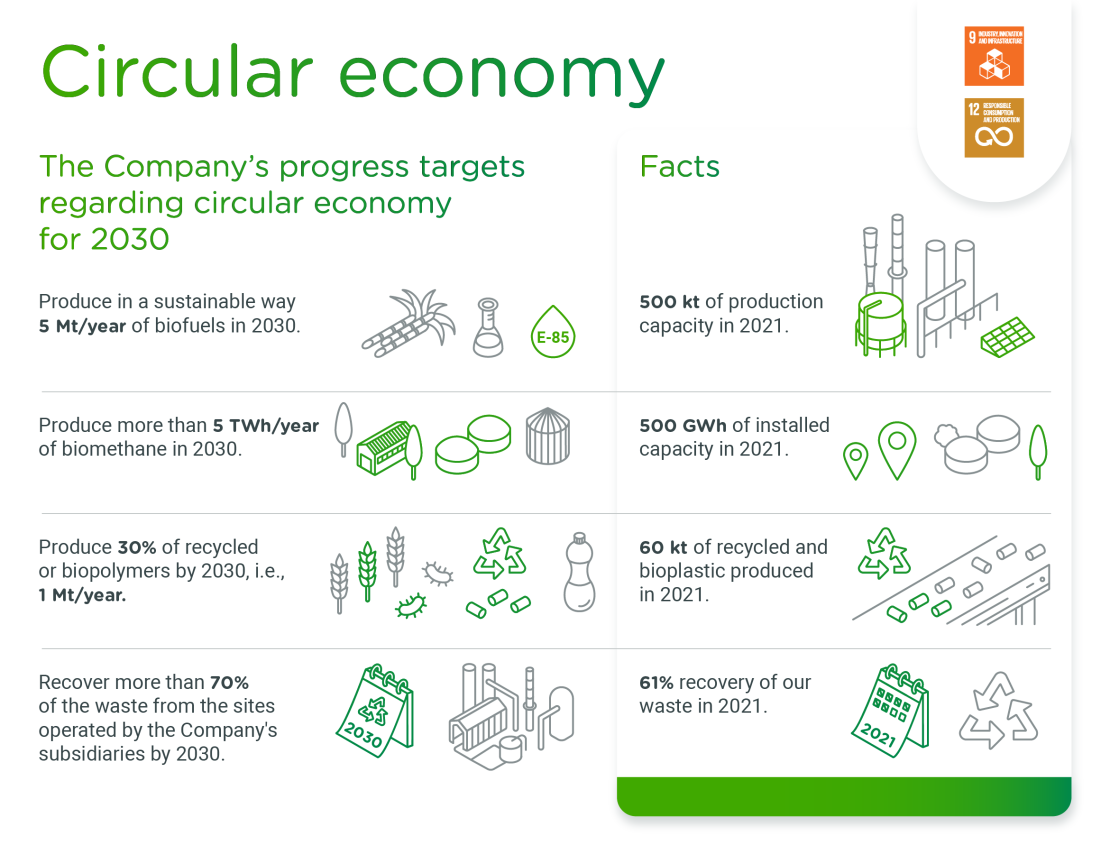 The Company’s progress targets regarding circular economy for 2030:

Our Code of Conduct

It states our values and priority guiding principles
Find out more

Our approach to tax