Paris, October 12,  2021 – Offshore Wind Power Limited (OWPL), the consortium formed by Macquarie’s Green Investment Group, TotalEnergies and Scottish developer Renewable Infrastructure Development Group (RIDG) has announced it is studying the use of offshore wind to power the production of green hydrogen on an industrial scale on the island of Flotta in Orkney, Scotland.

The OWPL consortium has submitted a proposal to the Crown Estate Scotland’s offshore wind leasing round (ScotWind) to develop the N1 plan option area west of Orkney. If successful, its proposal – called the West of Orkney Windfarm – could deliver renewable power to a green hydrogen production facility at the Flotta Terminal.

Plans to power the proposed Flotta Hydrogen Hub are being developed by OWPL in partnership with Flotta Terminal’s owner Repsol Sinopec, and Uniper, a leading international energy company and pioneer in the field of hydrogen. The proposal is also supported locally by EMEC Hydrogen who have spearheaded Orkney’s leading position in green hydrogen production.

“We believe that green hydrogen could provide a critical alternative route to market for some of Scotland’s largest offshore wind projects and play a significant role in creating wider economic benefits as the North Sea goes through its energy transition. We look forward to working with the Flotta partners to continue to develop this proposal.” said Edward Northam, Head of Green Investment Group Europe.

“TotalEnergies believes in the potential of renewable offshore wind power to produce green hydrogen, supporting our companies to meet their ambition in terms of carbon neutrality. With our proposed West of Orkney windfarm, there is an opportunity to create one of the world’s first green hydrogen plants in Orkney. It is an exciting plan, and we look forward to working on it with our partners and Orkney stakeholders.” said Julien Pouget Senior Vice President Renewables, TotalEnergies.

“The production of green hydrogen is a hugely exciting opportunity for both offshore wind and the Scottish supply chain. Projects with substantial capacity factors, such as the West of Orkney Windfarm, could deliver highly competitive power to facilities like the Flotta Hydrogen Hub which could, in turn, supply demand for hydrogen both nationally and internationally”. said Mike Hay, RIDG Commercial Director. “We’ve therefore committed to working exclusively with our partners to investigate this opportunity thoroughly and have already completed cable routing assessments and nearshore geophysical surveys to better understand the practical aspects of project delivery.”

“Flotta is an ideal location for green hydrogen production – it is surrounded by the best wind resource in Europe, it lies close to major shipping routes within the vast natural harbour of Scapa Flow. The time is right to maximise the incredible natural assets and geography of the Flow and Orkney to ensure a long-term sustainable, climate-friendly future for our communities.” said James Stockan, Leader of Orkney Islands Council, "We are very much open for business and ready to work with potential investors and operators to develop the significant strategic and international opportunities we know that our islands offer. The potential here is immense and we, as a Council, will do everything we can to support and enable this bright new opportunity.”

“Uniper is a pioneer in the field of hydrogen production and we’re already bringing our expertise and experience to an ever-expanding portfolio of projects across a number of markets, in Europe and in the UK. The Flotta Hydrogen Hub is an exciting concept, with the potential to deliver green hydrogen for the domestic and export markets. We now await the outcome of the ScotWind offshore wind leasing round, in anticipation that the proposal can be then realised.” said Dr Axel Wietfeld, CEO, Uniper Hydrogen.

“We fully support our industry’s transition to clean, green energy and a secure future for skilled oil and gas workers in Scotland and across the UK.  We have a strategic roadmap, supported by our shareholders and aligned with each of their strategic ambitions, including energy transition.” said José Luis Muñoz, Chief Executive Officer of Repsol Sinopec. “The Flotta Terminal has been in operation since 1976 and has made a significant contribution to Orkney’s economy and communities for more than 40 years.  This project would enable the terminal to be progressively transformed over time into a diversified energy hub where conventional oil and gas operations continue, co-existing alongside the development of a sustainable long-term green future for the facility.  The repurposing of Flotta will require local stakeholders support, retaining and upskilling the current workforce as well as the creation of long-term skilled jobs during both construction and hydrogen operations.”

“Orkney is well advanced in its ambition to be the global centre of excellence for research and demonstration of how the hydrogen economy of the future will work. We generated the world’s first tidal-powered green hydrogen in 2017 at EMEC’s tidal test site and have led various green hydrogen projects exploring generation, logistics and end use.” said Neil Kermode, Managing Director of EMEC. “For this project to go ahead, a number of vital elements will have to fall into place, including a market for green hydrogen. We are pleased to be collaborating with our offshore wind partners in pursuit of this goal and we are already in discussion with the Scottish and UK governments to explore the mechanisms required to make this vision happen.” 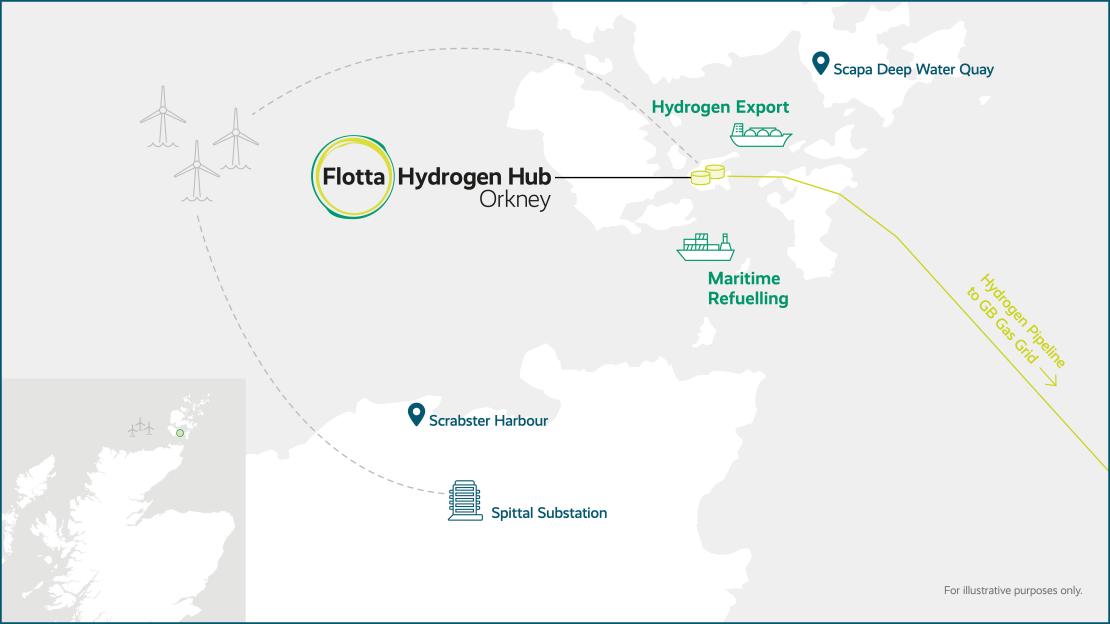 Green Investment Group, a leading renewable energy developer with a mission to accelerate the green transition, has invested around £625m in Scotland since 2012. Over the three years, Green Investment Group has committed or arranged £6.9bn across its global portfolio, further cementing its position as one of the world’s leading renewable energy investors and developers. Macquarie Group, Green Investment Group’s parent company, has supported almost half of the UK’s offshore wind capacity currently in operation and is also supporting the Acorn project at St Fergus, a leading Scottish carbon capture and storage project.

TotalEnergies is a broad energy company and one of the largest offshore operators on the UK continental shelf with a significant track record of successfully delivering complex projects in harsh sea conditions. With an ambition to be a world-class player in the energy transition, the Company develops and operates renewable projects worldwide. In Scotland, it has a majority stake in the 1,140 MW Seagreen 1 offshore wind farm located off the east coast of Scotland, which is currently under construction. Some of its recent developments also include the £3.2bn Culzean gas project, delivered with 52% UK local content. Over the last five years, TotalEnergies has invested around £2.5bn in projects in Scotland.

RIDG, a Scottish offshore wind developer with decades of sector experience, has been working closely with local and national stakeholders since 2016 to bring forward well-considered project opportunities into the ScotWind leasing process.

Uniper is an international energy company with around 12,000 employees in more than 40 countries. The company plans to make its power generation CO2-neutral in Europe by 2035. With about 35 GW of installed generation capacity, Uniper is among the largest global power generators. Its main activities include power generation in Europe and Russia as well as global energy trading, including a diversified gas portfolio that makes Uniper one of Europe’s leading gas companies. In 2020, Uniper had a gas turnover of more than 220 bcm. Uniper is also a reliable partner for municipalities, public utilities, and industrial companies for developing and implementing innovative, CO2-reducing solutions on their way to decarbonizing their activities. As a pioneer in the field of hydrogen, Uniper has set itself the target of operating worldwide along the entire value chain in the future and implementing projects that will make hydrogen the mainstay of the future energy supply.

The company is headquartered in Düsseldorf and currently the third-largest listed German utility. Together with its main shareholder Fortum, Uniper is also the third-largest producer of CO2-free energy in Europe.

Repsol Sinopec Resources UK is an oil and gas exploration and production company operating in the North Sea.  Assets include producing oil fields, major new developments and a number of assets that have ceased production or are approaching decommissioning.   Based in Aberdeen, Scotland, it has interests in 48 fields (of which it operates 38) on the UK Continental Shelf with 11 offshore installations (10 fixed and one floating) and two onshore terminals – on Flotta in Orkney and at Nigg in the Cromarty Firth.

EMEC Hydrogen is the arm of the European Marine Energy Centre (EMEC) focused on hydrogen innovation and demonstration. Using Orkney’s renewable energy to produce green hydrogen, EMEC is a partner in a growing number of innovative energy systems and hydrogen demonstration projects driving the development of the local hydrogen economy. In 2017, the world’s first tidal-powered hydrogen was generated at EMEC’s tidal test site.

EMEC is committed to supporting the transition to net zero working and is working alongside global stakeholders to decarbonise power, heat and transport.

About TotalEnergiesTotalEnergies is a broad energy company that produces and markets energies on a global scale: oil and biofuels, natural gas and green gases, renewables and electricity. Our 105,000 employees are committed to energy that is ever more affordable, clean, reliable and accessible to as many people as possible. Active in more than 130 countries, TotalEnergies puts sustainable development in all its dimensions at the heart of its projects and operations to contribute to the well-being of people.

Cautionary Note
This press release, from which no legal consequences may be drawn, is for information purposes only. The entities in which TotalEnergies SE directly or indirectly owns investments are separate legal entities. TotalEnergies SE has no liability for their acts or omissions. In this document, the terms “TotalEnergies”, “TotalEnergies “Company” and “Company” are sometimes used for convenience. Likewise, the words “we”, “us” and “our” may also be used to refer to subsidiaries in general or to those who work for them. This document may contain forward-looking information and statements that are based on a number of economic data and assumptions made in a given economic, competitive and regulatory environment. They may prove to be inaccurate in the future and are subject to a number of risk factors. Neither TotalEnergies SE nor any of its subsidiaries assumes any obligation to update publicly any forward-looking information or statement, objectives or trends contained in this document whether as a result of new information, future events or otherwise.