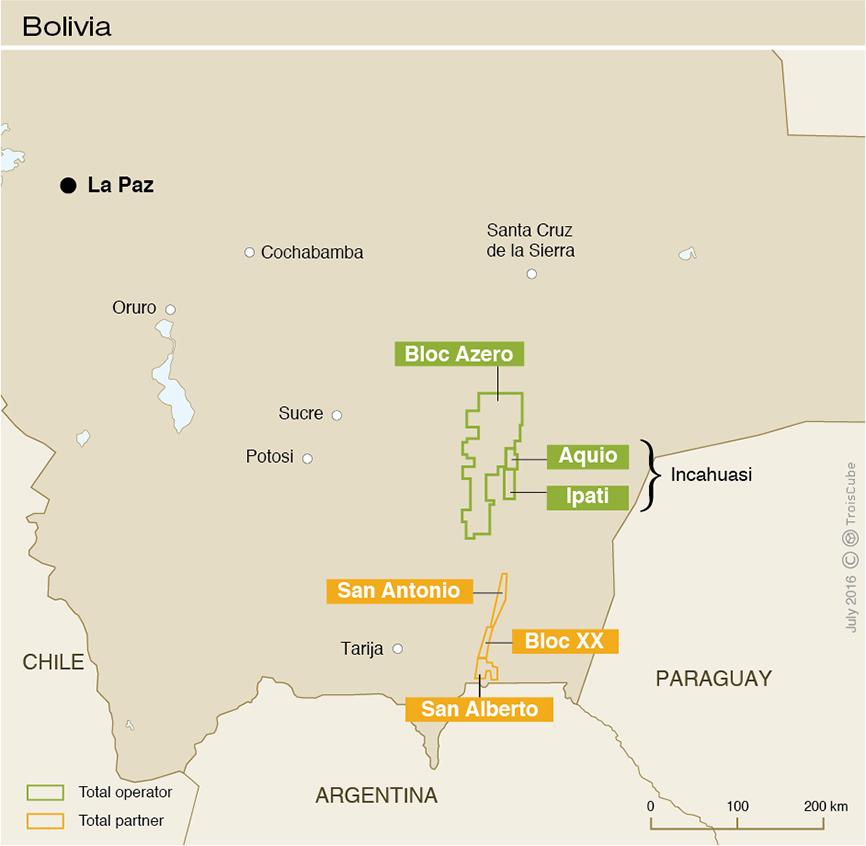 Paris - Total has put on stream the Incahuasi gas and condensate field, the Group’s first operated development in Bolivia, with a production capacity of 50,000 barrels of oil equivalent per day (boe/d).

"Incahuasi is one of the largest gas and condensate fields brought on stream in Bolivia. Incahuasi’s production will contribute to Bolivia’s gas exports to Argentina and Brazil as well as domestic consumption”, said Arnaud Breuillac, President of Total Exploration & Production. “Delivered within budget, Incahuasi is the 4th start-up this year and as a low-cost project with a long production plateau, it will contribute to the Group’s production growth in 2016 and beyond.”

The Incahuasi field lies at more than 5,600 meters beneath the Andean foothills, 250 kilometers from the city of Santa Cruz de la Sierra. The first phase of the field development involves three wells, a gas treatment plant and 100 kilometers of associated export pipelines. The second phase of development, involving three further wells, is currently under consideration.

Total has been present in Bolivia since 1996 and is one of the country’s leading oil and gas companies, with 2015 equity production of 28,000 boe/d, mostly gas. In addition to the operated Incahuasi field, Total is a partner on the San Antonio, San Alberto and XX-Tarija Oeste (Itaú) production licenses. The Group also operates the 7,800 square kilometer Azero exploration license in the Andean foothills.

Total is a global integrated energy producer and provider, a leading international oil and gas company, and the world’s second-ranked solar energy operator with SunPower. Our 96,000 employees are committed to better energy that is safer, cleaner, more efficient, more innovative and accessible to as many people as possible. As a responsible corporate citizen, we focus on ensuring that our operations in more than 130 countries worldwide consistently deliver economic, social and environmental benefits. total.com

This press release, from which no legal consequences may be drawn, is for information purposes only. The entities in which TOTAL S.A. directly or indirectly owns investments are separate legal entities. TOTAL S.A. has no liability for their acts or omissions. In this document, the terms “Total” and “Total Group” are sometimes used for convenience where general references are made to TOTAL S.A. and/or its subsidiaries. Likewise, the words “we”, “us” and “our” may also be used to refer to subsidiaries in general or to those who work for them.