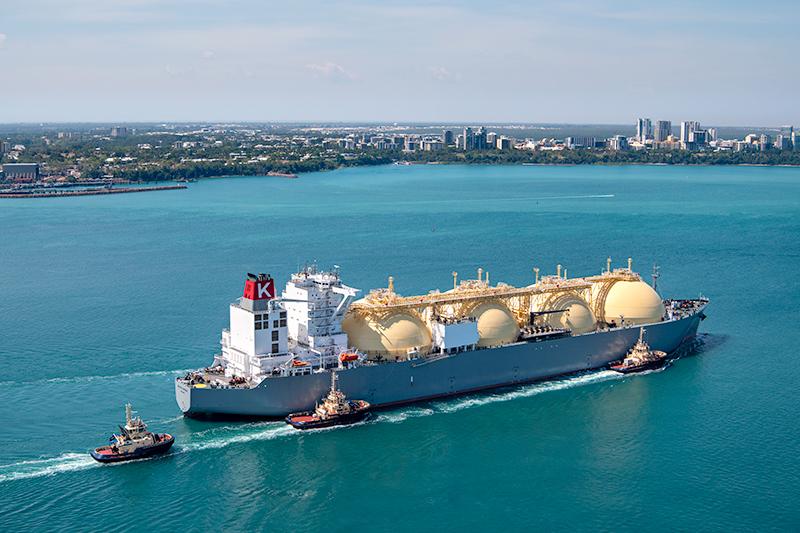 Natural gas – the least carbon-intensive fossil fuel – is one of the solutions available for combating global warming while providing the world with the energy it needs. Because although curbing carbon emissions is a top priority worldwide, the challenge is even more urgent in developing countries – especially in Asia – that still depend heavily on coal. According to the International Energy Agency’s Sustainable Development Scenario, natural gas consumption will remain high in 2040, when the fuel is still expected to meet nearly a quarter of global energy demand. Ensuring gas can fulfill its role in the world energy mix represents a key issue. At TotalEnergies, we’ve made it a major focus of our strategy.

Our natural gas strategy factors in the climate challenge

No. 2
worldwide in LNG

Accessible, plentiful and a good partner for renewables, natural gas has many attractive qualities. That is why we are pursuing a strategy aimed at increasing the share of natural gas to 50% of total sales by 2030.

As the second-largest private-sector liquefied natural gas (LNG) provider in the world, we operate across the entire LNG value chain, from production and liquefaction – with projects including Arctic LNG 2 in Russia and Mozambique LNG in Africa – to transportation, regasification and natural gas supply to homes and businesses. To expand our customer base and develop new markets, we are investing in regasification infrastructure (land-based systems and floating storage and regasification units – FSRUs), as well as in operations further downstream, such as gas distribution in India and power generation.

Because natural gas emits half as much CO2 as coal during combustion, we promote the use of this resource in power generation. Replacing coal with natural gas in power plants would cut global carbon emissions by 10%. At TotalEnergies, we have acquired several combined-cycle gas turbine (CCGT) power plants across Europe, in France, Spain and Belgium, to generate electricity.

We are also continuing our work and investments in developing new uses for gas, whether in road transportation with natural gas for vehicles (NGV), distributed by Total Gas Mobility in Europe and Clean Energy in the United States, or in shipping with LNG bunker fuel.

Lastly, to help reduce the carbon intensity of natural gas, we are expanding into the field of renewable gas and low-carbon hydrogen.

Our new Biogas business unit created in September 2020 is tasked with developing and operating facilities to produce biomethane from industrial and agricultural organic matter. With the acquisition of Fonroche Biogaz, a company that designs, builds and operates methanization units in France, we have become the French leader in renewable gas. Our goal is to produce 1.5 terawatt-hours (TWh) of biomethane annually by 2025 and close to 5 to 6 TWh by 2030. Fonroche Biogaz will be the cornerstone of our development in this segment, especially in France, one of the most dynamic markets in Europe. In December 2020, we joined forces with our affiliate Clean Energy to develop renewable gas production projects for the low-carbon mobility market in the United States.

Biomethane has the same properties as natural gas and can be used for the same applications. It is usually injected into the transmission and distribution networks, but it can also be used to fire boilers and as a road and maritime fuel. Derived from organic matter, biomethane is a carbon-neutral, renewable energy source whose share in the distribution network alongside natural gas is slated to grow. TotalEnergies' objective is to power its industrial sites using biomethane and to develop a green gas offering for its customers.

The development of the biomethane sector also has many advantages at the local level: it enables the farming community and other agricultural stakeholders to participate in the energy transition, foster a regional circular economy (waste management, job creation, locally produced energy, etc.) and reap the associated environmental benefits.

An Hydrogen business unit was set up in July 2020, giving shape to our ambition to become a producer and supplier of the fuel. A high-potential energy carrier, hydrogen can be used to power vehicles, especially trucks, decarbonize industrial feedstocks and store electricity. The advantage is that the use of hydrogen generates zero CO2 emissions. 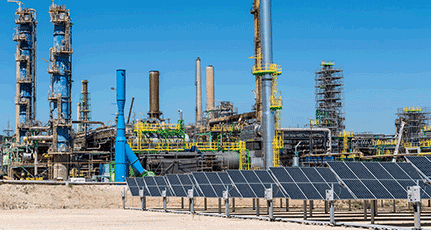 TotalEnergies and Engie have signed an agreement to design, develop, build and operate one of the biggest renewable hydrogen production plants in France at the La Mède biorefinery near Marseille.

Scheduled to come on stream in 2024, the Masshylia project will produce at least 5 metric tons of green hydrogen per day on average (measured over the year) to power TotalEnergies’s biofuel production at La Mède. The plant will run on solar power produced locally.

If natural gas is to play a key role in the energy transition, methane emissions will have to be kept to a bare minimum. Methane’s 100-year global warming potential is at least 25 times that of carbon dioxide.

TotalEnergies is a signatory of the Oil and Gas Methane Partnership (OGMP) of the United Nations Environment Programme, which promotes efforts to measure, reduce and report methane emissions.

In 2020, we committed to the second phase of the initiative (OGMP 2.0), which establishes a more ambitious methane reporting framework extending to the full gas value chain, including non-operated assets. It includes itemized emissions by facility, reporting of inventory methodologies, the implementation of aerial measurement campaigns and the identification of target reductions for operated activities.

Together, We Can Reduce Emissions

Our climate indicators on a dedicated website
Find out more