From September 8 to October 28, 2023, the Rugby World Cup will take place in France. For the opening match, the French team will face the All Blacks, the national team of New Zealand and will launch the competition with a dream match. The Rugby World Cup France 2023 will be a flagship event for rugby, pitting 20 teams against each other with the dream of winning the 10th Men's Rugby World Cup in history, and the second to be held in France after a memorable edition in 2007. Scheduled in the year of the bicentenary of the creation of rugby, invented in 1823 by William Webb-Ellis, the tournament will be the ideal ground to celebrate the tradition of ovalie and to mix the spirit of innovation of all stakeholders.

To this end, TotalEnergies has signed on as an official sponsor of the competition and will work with the Organizing Committee to help make the Rugby World Cup a time for celebration and sharing. Beyond this objective, it will be an opportunity for the Company to raise awareness of its multi-energy dimension and to actively engage all its stakeholders and employees in this ambition.

When rugby goes hand-in-hand with energy 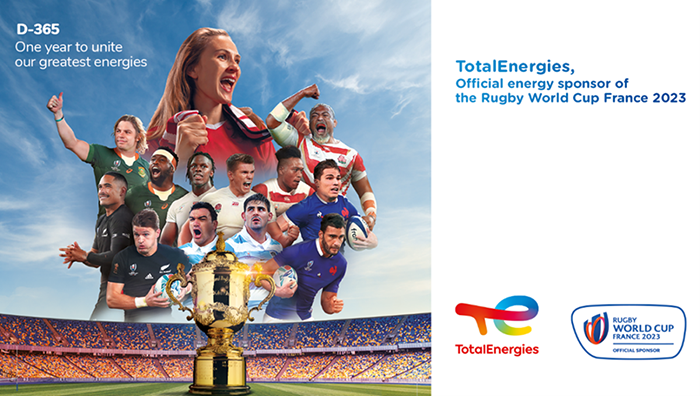 48 matches, 51 days of competition, 9 stadiums, 20 qualified countries and millions of dedicated spectators. For a few weeks next fall, the world will be buzzing with tackles, penalties, tries and scrums.

To go all the way to the final and emerge victorious, the greatest teams will truly need to play as one by sharing such common values as rigor, solidarity and passion. The winning team will clearly need an extra dose of energy to lift the trophy...

It is an honor and a pleasure for TotalEnergies to be an Official Sponsor of Rugby World Cup France 2023. Integrity, passion, solidarity, discipline and respect are key features of this sport, and they match our company’s values. More importantly, rugby is organized first and foremost around a team, just like TotalEnergies: a collective of women and men committed to the energy transition. France is our home, especially southwestern France, a land of rugby that is an integral part of our history and DNA. We want to celebrate our ties and close relationship with our stakeholders and customers across the country I am delighted that TotalEnergies’ teams will be putting their energy into making this great sports event a festive and popular French success worldwide!
Patrick Pouyanné Chairman and CEO of TotalEnergies

As an official sponsor of the Rugby World Cup France 2023, TotalEnergies has been playing a major role in promoting the competition to the public.

With this goal in mind, TotalEnergies and the Rugby World Cup France 2023 share the same ambition of making sustainable development the focal point of their strategy, projects and operations. Putting this into action, they intend to work together to create an environmentally responsible event, especially by deploying a net-zero mobility plan and supplying green energy. Before the competition gets underway, come and discover how the Company is organizing various events and experiences to put this ambition in the spotlight. 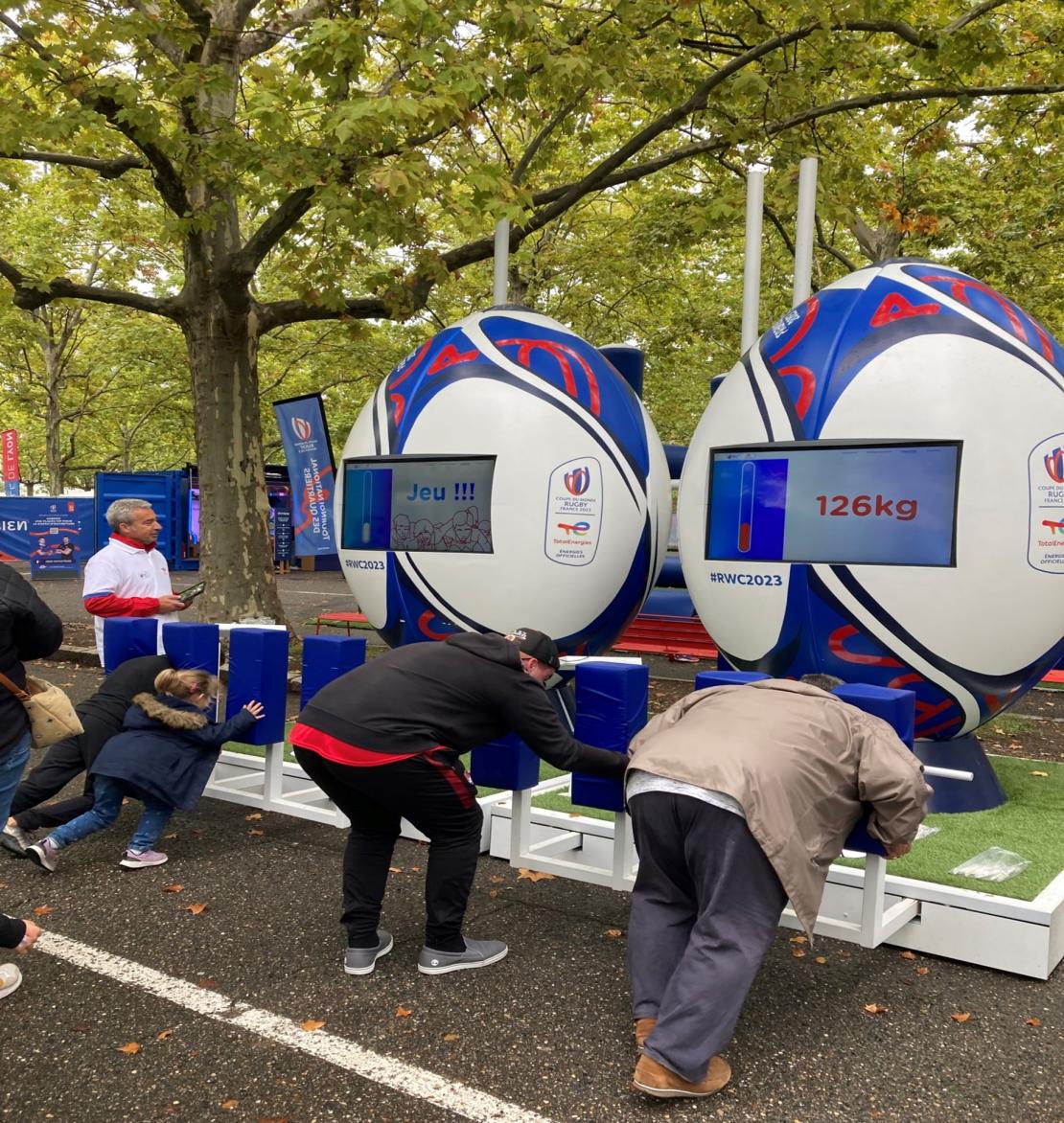 The Scrum Machine is an item of training equipment that helps players, especially forwards, specifically prepare for scrums, which are an iconic part of rugby play. Athletes pass their heads through a yoke-like structure and push with all their might. ​​

With this scrum machine specially created by TotalEnergies, you can measure your strength and challenge both friends and family by comparing your performance against professional players, rising stars and beginners!

The TotalEnergies Scrum Machine converts your exerted force into an energy equivalent from daily life. For example, you will see if your strength is enough to recharge your smartphone or light your office. Find out at the Rugby Village.

Inside the World Cup: take a behind-the-scenes look at RWC 2023 through our series of conferences

The company is thus further demonstrating the consistency of its partnership with the France 2023 World Cup and its involvement in the world of rugby. For this first event, Sébastien Piqueronies, coach of the Section Paloise (Top 14) and former trainer of many French rugby team players, spoke about the emergence of this new and promising generation, which, as you will discover, has never lost to the All Blacks!

Through the evocation of his memories of double world champion of the under 20 years, the work and the values behind these successes, the formation of a team and the importance of the group life, Sébastien Piqueronies returned on what created the foundations of the current French team. 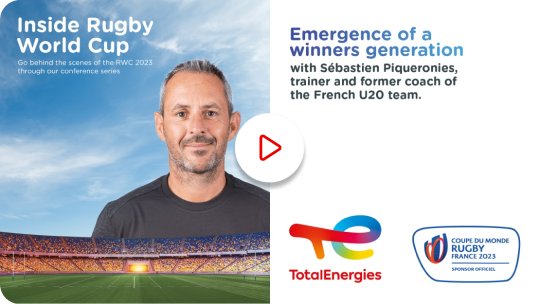 The Solidarity Shirt: a project using sharing and inclusion to bring greater cheer to the competition

As part of its sponsorship of France 2023, TotalEnergies wants to create a solidarity shirt that reflects the values of rugby.

Together with the TotalEnergies Foundation's partner associations, seven teams of young people from the association La Source have taken up the challenge of imagining and designing the future design of the supporter's shirt. Thanks to the "Ecoles de Production", also partners of the TotalEnergies Foundation, the shirt will be made by the students as part of an educational project and in an environmentally responsible manner.

The shirt will be given to young people, educators and TotalEnergies employees, who will all be invited to the solidarity stand to watch the matches.