Renewables: Total strengthens its position in the Spanish solar market and covers all its power needs in Europe with green energy

Paris, September 25, 2020 – Total is strengthening its presence in the Spanish electricity market through an agreement with the Spanish developer Ignis to develop 3.3 gigawatts (GW) of solar projects located close to Madrid and Andalusia. The first projects in the Ignis portfolio are scheduled to start in 2022, with the ambition of bringing them all into production by 2025. Remuneration will be paid by Total to Ignis as the projects develop.

This transaction follows the two agreements signed in February 2020 with Powertis and Solarbay Renewable Energy to develop nearly 2 GW of solar projects; and the acquisition last May from Energias de Portugal of its portfolio of 2.5 million residential customers and two gas-fired combined cycle power plants (850 MW).

"Total is becoming one of the main broad-energy players in the country by intervening both in the production of renewable and gas-based electricity and in the distribution of gas and electricity. Our ambition, first and foremost, is to provide a clean, affordable electricity offering to our residential customers in Spain. Spain is a priority country for Total in Europe and we fully intend to leverage the market’s growth opportunities that the country offers to respond concretely to the challenges of the energy transition towards carbon neutrality.," said Patrick Pouyanné, Chairman and CEO of Total. "This decision to invest massively in renewable electricity capacity to supply all our industrial operations in Europe with green energy is concrete proof of our decision to move towards decarbonising our European operations in line with our new climate ambition. It also demonstrates the value of integrating production, trading and sales in the electricity chain.” 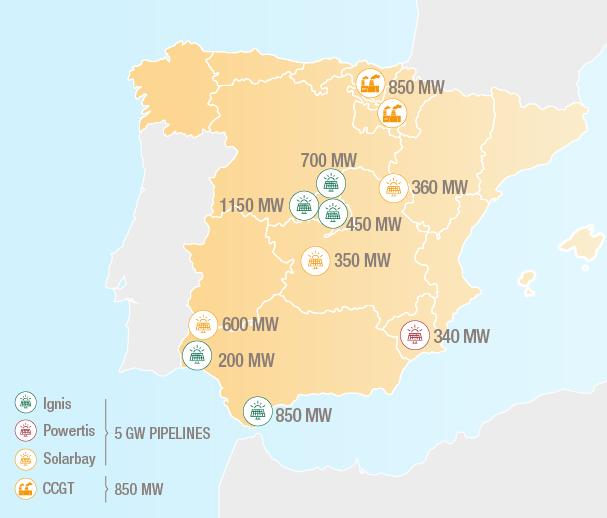 Total and Low-Carbon Electricity
As part of its ambition to become the responsible energy major, Total is building a portfolio of low-carbon electricity operations, with the objective of seeing them account for 40% of its sales mix by 2050. Today, Total’s gross low-carbon power generation capacity is close to 9 gigawatts, of which more than 5 gigawatts from renewable energy sources. In pursuit of its ambition to increase this figure fivefold by 2025, Total intends to continue developing its activities to become one of the leading players in renewable energies worldwide.

Cautionary Note
This press release, from which no legal consequences may be drawn, is for information purposes only. The entities in which TOTAL S E directly or indirectly owns investments are separate legal entities. TOTAL S E has no liability for their acts or omissions. In this document, the terms “Total”, “Total Group” and Group are sometimes used for convenience. Likewise, the words “we”, “us” and “our” may also be used to refer to subsidiaries in general or to those who work for them.
This document may contain forward-looking information and statements that are based on a number of economic data and assumptions made in a given economic, competitive and regulatory environment. They may prove to be inaccurate in the future and are subject to a number of risk factors. Neither TOTAL S E nor any of its subsidiaries assumes any obligation to update publicly any forward-looking information or statement, objectives or trends contained in this document whether as a result of new information, future events or otherwise.