Angola: TotalEnergies is Rolling out its Multi-Energy Strategy by Launching Three Projects in Oil, Gas and Solar Energy

Paris, July 28, 2022 – As part of the rollout of its multi-energy strategy in Angola, TotalEnergies announces the launch of the Begonia oil field, and Quiluma and Maboqueiro gas fields developments, as well as its first photovoltaic project in the country, with a capacity of 35 MWp and the possibility of adding 45 MWp in a second phase.

The Begonia development consists of five wells tied back to the Pazflor FPSO (floating production, storage and offloading unit), already in operation on Block 17. After commissioning, expected in late 2024, it will add 30,000 barrels a day to the FPSO's production.

After CLOV Phase 3, another satellite project that produces 30,000 barrels a day and was launched on Block 17 in June 2022, Begonia is the second TotalEnergies-operated project in Angola to use a standardized subsea production system, saving up to 20% on costs and  shortening lead times for equipment delivery.

The project represents an investment of $850 million and 1.3 million man-hours of work, 70% of which will be carried out in Angola.

NAG1 is the first non-associated natural gas project developed in Angola. Gas produced from the Quiluma and Maboqueiro offshore fields will supply the Angola LNG plant, improving Angola's LNG production capacity and the availability of domestic gas for the country's industrial development. Production is scheduled to start in mid-2026.

Quilemba, Angola's first TotalEnergies solar plant
TotalEnergies, alongside the Ministry of Energy and Water as well as its partners Sonangol and Greentech, was also awarded by the Angolan authorities, the concession for the construction of the Quilemba photovoltaic plant, with initial capacity of 35 MWp and the possibility of adding 45 MWp in a second phase.

The plant will be located in the southern city of Lubango and should come on stream at the end of 2023. It will contribute to the decarbonization of Angola’s energy mix and, through a fixed-price Power Purchase Agreement (PPA), deliver significant savings for the Angolan government compared to the fuel used in existing power plants. TotalEnergies holds an 51% interest in Quilemba solar, alongside affiliates of Sonangol EP (30%) and Angola Environment Technology (Greentech, 19%).

"Begonia, NAG1 and Quilemba illustrate the deployment of our multi-energy strategy in Angola, where TotalEnergies has been active for nearly seventy years," said Patrick Pouyanné, Chairman and CEO of TotalEnergies. “With Begonia, the first subsea tieback to another block, we are leveraging the existing Pazflor infrastructure, reducing costs, thanks largely to the standardization of subsea equipment, and continuing to innovate in the deep offshore. With the NAG1 project, we will contribute to the country’s industrial development and enable Angola, from 2026, to increase its LNG production and to contribute to the security of supply of Europe and Asia. Quilemba will allow us to harness the country's solar potential and develop a sustainable model for the production of electricity. These three projects demonstrate TotalEnergies' ambition to support Angola during the energy transition by producing energy with low carbon intensity and developing renewables in a country with strong potential." 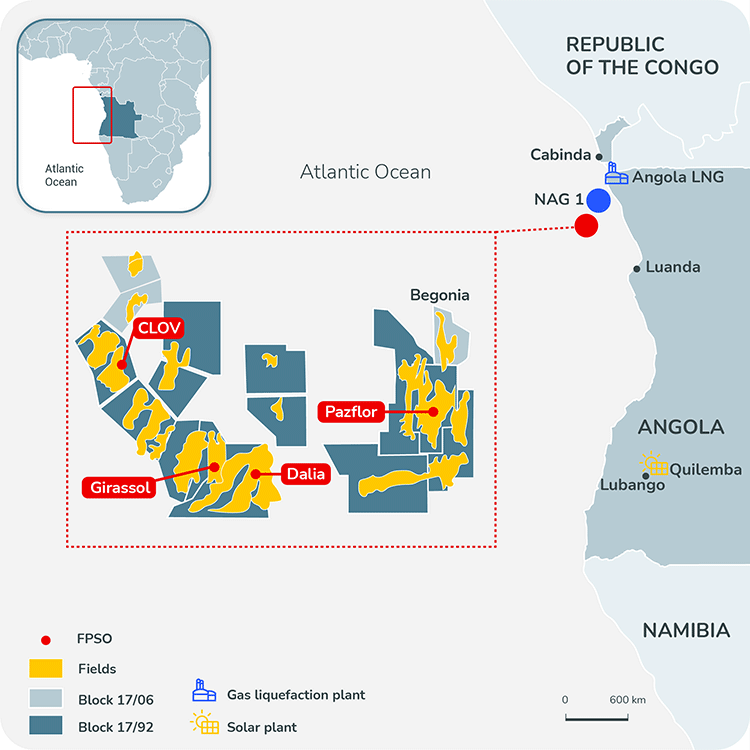 TotalEnergies is a global multi-energy company that produces and markets energies: oil and biofuels, natural gas and green gases, renewables and electricity. Our more than 100,000 employees are committed to energy that is ever more affordable, cleaner, more reliable and accessible to as many people as possible. Active in more than 130 countries, TotalEnergies puts sustainable development in all its dimensions at the heart of its projects and operations to contribute to the well-being of people.

Cautionary Note
The terms “TotalEnergies”, “TotalEnergies company” or “Company” in this document are used to designate TotalEnergies SE and the consolidated entities that are directly or indirectly controlled by TotalEnergies SE. Likewise, the words “we”, “us” and “our” may also be used to refer to these entities or to their employees. The entities in which TotalEnergies SE directly or indirectly owns a shareholding are separate legal entities. TotalEnergies SE has no liability for the acts or omissions of these entities. This document may contain forward-looking information and statements that are based on a number of economic data and assumptions made in a given economic, competitive and regulatory environment. They may prove to be inaccurate in the future and are subject to a number of risk factors. Neither TotalEnergies SE nor any of its subsidiaries assumes any obligation to update publicly any forward-looking information or statement, objectives or trends contained in this document whether as a result of new information, future events or otherwise. Information concerning risk factors, that may affect TotalEnergies’ financial results or activities is provided in the most recent Registration Document, the French-language version of which is filed by TotalEnergies SE with the French securities regulator Autorité des Marchés Financiers (AMF), and in the Form 20-F filed with the United States Securities and Exchange Commission (SEC).