France: Total obtains 20% of the volumes of the latest national solar tender - More than 600 MW of projects awarded in France

Paris, 27 October 2020 – Total, through Total Quadran, a wholly-owned affiliate dedicated to developing and producing renewable energy in France, was awarded 67 megawatt-peak (MWp) of solar projects representing 20% of the volumes awarded in the eighth period of the CRE (French Energy Regulatory Commission) call for tenders. Total is thus consolidating its position as France's second-largest solar developer with 606 MW of projects in all the sections of the calls for tenders.

Most of the awarded sites will be developed on repurposed sites such as quarries and former industrial sites. Three of these projects are part of the solarization program for Total Group sites.

« Total Quadran is proud to be among the leaders in renewable energies in France and to continue to perform in the calls for tenders of the French Energy Regulatory Commission. The results of the call for tenders are a good illustration of our ability to put together solid and competitive proposals in a competitive environment. » said Thierry Muller, General Manager of Total Quadran. 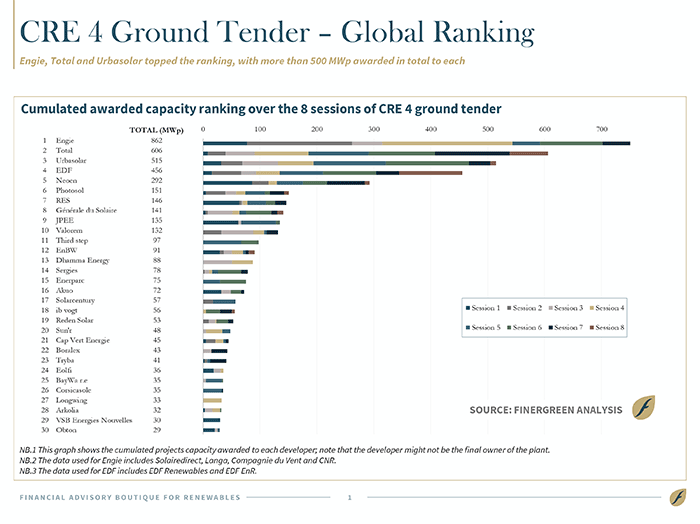 Total, renewables and electricity
As part of its ambition to get to net zero by 2050, Total is building a portfolio of activities in renewables and electricity that could account for up to 40% of its sales by 2050. By the end of 2020, Total's gross power generation capacity worldwide will be around 12 gigawatts, including more than 7 gigawatts of renewable energy. With the objective of reaching 35 GW of production capacity from renewable sources by 2025, Total will continue to expand its business to become one of the world leaders in renewable energies.

Cautionary Note
This press release, from which no legal consequences may be drawn, is for information purposes only. The entities in which TOTAL SE directly or indirectly owns investments are separate legal entities. TOTAL SE has no liability for their acts or omissions. In this document, the terms “Total”, “Total Group” and Group are sometimes used for convenience. Likewise, the words “we”, “us” and “our” may also be used to refer to subsidiaries in general or to those who work for them.This document may contain forward-looking information and statements that are based on a number of economic data and assumptions made in a given economic, competitive and regulatory environment. They may prove to be inaccurate in the future and are subject to a number of risk factors. Neither TOTAL SE nor any of its subsidiaries assumes any obligation to update publicly any forward-looking information or statement, objectives or trends contained in this document whether as a result of new information, future events or otherwise.