The main challenge in achieving the energy transition so essential to our world lies in balancing economic growth with measures to manage climate change. Along with renewable energies, there is a fossil fuel that could change the game: natural gas, for which demand is expected to grow sharply. 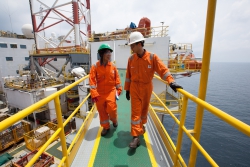 Energy industry professionals have said it time and time again: natural gas has its place in the global energy transition. The triennial World Gas Conference, which is taking place this year from June 1-5 in Paris, will provide the industry's leaders with an opportunity to hone their arguments. They will then be able to deliver their message loud and clear at the other great event of the year, the United Nations Conference on Climate Change (COP21), which will also take place in Paris, in December. "Gas is part of the solution" affirms Jérôme Ferrier, President of the International Gas Union (IGU). "It is also the essential complement to renewable energies." These energies, even if they are on the rise, are only expected to represent 19% of the global energy mix in 2040 compared to 14% today, according to the International Energy Agency (IEA), while nuclear's share should only grow to 7% in 2040 from 5% in 2012.  In other words, the world economy will still need fossil fuels in the years to come. Power plants could largely rely on natural gas for their production: "France still imports coal from the United States for some of its power plants, whereas coal could be replaced with gas, which is less polluting!"  exclaims Ferrier. In addition, gas advocates call for greater use of natural gas in transportation - through the conversion of trucks, ships and even individual vehicles - as well as in industry.

Natural gas presents advantages in terms of costs, flexibility and environmental impact. CO2 emissions from the combustion of natural gas to generate electricity are only half of that from burning coal, a good thing for a planet confronted with global warning. Conversion to gas is easy, particularly for power generation, as it only takes two years to build a power plant. In the United States, coal's share in power production dropped to 39% in 2013 from 50% in 2004 thanks to greater use of natural gas. This trend should accelerate, since the U.S. Environmental Protection Agency (EPA) proposed a plan in 2014 to drastically reduce CO2 emissions from existing power plants. The objective is to reduce emissions by 30% from 2005 levels by 2030. This goal should result in additional shutdowns of coal-fired power plants. China is also changing over. After having eliminated several coal-fired power plants in the last few months, the country will close the last one still in service in Beijing next year, replacing it with a new gas-fired power plant. This is a highly symbolic step for a country grappling with extreme pollution.

Another advantage of natural gas for both emerging and industrialized countries is that it is abundantly available, especially with the numerous discoveries in recent years. According to IEA figures, global reserves of conventional gas stood at 465,000 billion cubic meters at the end of 2013, to which must be added 342,000 billion cubic meters of unconventional reserves (shale gas, tight gas and coalbed methane). Russia, Iran and Qatar have the world's largest proved reserves of conventional gas. According to Advanced Resources International Inc. (ARI), the United States holds the largest reserves of shale gas, followed by China and Argentina.

The IEA expects world demand for gas to continue increasing in the coming years, particularly in response to the enormous energy needs of such economies as China and India, as well as of countries in Africa and the Middle East. The forecasts show that gas will be the only fossil fuel to increase its share in the future global energy mix.

Europe looks for ways to diversify and secure its supply

For the time being, Europe can still meet part of its gas needs through domestic production, which, Turkey included, covers half of the region’s demand.  Russia currently supplies 30% of Europe's requirements, exporting some 150 billion cubic meters of gas per year to European markets via three gas pipelines, one of which crosses Ukraine. In the face of the recurring tensions between Moscow and Kiev, not to mention the recent sanctions imposed on Russia, Europe is looking to diversify and secure its supplies. It imports 60 billion cubic meters per year from Algeria - Europe's number three supplier after Russia and Norway - and also imports LNG, notably from Qatar.

Europe also hopes to be able to count on Iran, although this is still a question mark.  In a first stage, Iran could serve as a transit country for gas coming from Turkmenistan, a country that is rich in gas (the world's fourth largest reserves) but poor in transportation infrastructure for now.  Following an interview with the President of Turkmenistan, Maros Sefcovic, the European Commission Vice President responsible for energy, mentioned in early May that Europe could possibly import Turkmen gas via the Caspian Sea and Iran. In a second stage, gas consumed in Europe could come from Iran itself. The timeframe for this is difficult to determine, however, since Iran is still subject to Western sanctions due to its nuclear ambitions.

The majors are investing massively in natural gas

Despite the uncertainty over a rapid resolution of these thorny geopolitical questions, the majors are betting on gas as an energy with a future. Shell, Chevron, BP, Total and Exxon Mobil are all investing massively in this area. However, in order for the expected rise in demand to occur, two conditions must be met: production and power plant construction costs must be contained and gas's environmental impact, although limited, must be kept under control.  Lastly, the accelerated transition from coal to gas for power production also depends to a great extent on the success of negotiations that will take place during COP21. A successful outcome is still uncertain, but gas industry leaders are vocal in making their case.

For more on the same subject: